Thirty years ago, the modern running shoe was invented. Since then, running-related injuries have risen. And so a growing movement of runners are taking to the streets barefoot.

Perhaps no man has had more positive influence upon running than Arthur Lydiard. Yet you could, perversely, almost blame the Kiwi master-coach for the pernicious rise of the modern, high-technology running shoe even though Lydiard’s cadre of world-class runners trained only in canvas plimsolls.

American Bill Bowerman ran with Lydiard in the early 1970s, and returned home inspired to experiment with his wife’s waffle iron to create the first Nike running shoe. Lydiard was aghast; he thought such footwear would cause injuries and poor technique. And as with so many other things, Lydiard, it appears, was ahead of his time.

Since 2002, the 30th anniversary of the first Nike, and driven by statistics showing an alarming rise in running-related foot, ankle and knee injuries, a fringe community of runners have been rejecting shoes altogether and going barefoot.

Now it threatens to go mainstream, and the mad movement’s reluctant prophet is a very sane running writer, Chris MacDougall, whose story of conversion to barefoot theology makes inspiring reading. His manifesto appears in his new book, Born to Run, in which he writes: “Blaming the running injury epidemic on big, bad Nike seems too easy but that’s OK, because there’s a lot to throw at them”. He says the book sits 13th on the US bestseller lists.

Six months ago, sick of constant muscle soreness in my hips and adductors which stopped me running the big miles I wanted to, I began visiting a sports biomechanist called (ironically) Greg Pain.

Pain, who runs Auckland clinic BioSport, is a running heretic. He thinks 98% of people run wrongly and blames a Western culture which encourages us to take cars, buses and trains and sit at desks when we should be running and walking. He believes it causes us to become unbalanced, with overdeveloped thighs and hips which take on too much work and eventually lead to injury.

He reconstructed my unique running style, which resembled an old lady chasing a bus while carrying four bags of shopping. Now I run straight-backed, with shorter strides, tensing my core muscles, `firing’ my gluteals (bum muscles) and hamstrings to flick my heels behind me to get more kick. I’m faster, more efficient and injury-free.

A lot of what Pain and MacDougall say seems to fit. I threw Born to Run to Pain a fortnight ago. It was his Archimedes in the bathtub moment. “It’s a great book,” he says. “It challenges the way we wear shoes the way we do; even more so, it challenges our lifestyle.” Ten days later, we went barefoot running.

As we trot through central Auckland, Greg spots two blokes looking at us as “if we were idiots”. We pass a woman who gives me the disgusted glance you might cast at someone who allows their dog to foul the pavement and doesn’t pick it up. We may be New Zealand’s early-adopters: I suspect there aren’t many other blokes running around the city without shoes.

But they all laughed when Christopher Columbus said the world was round. This may be the future. It certainly seems to work. It’s amazing how your stride immediately, unconsciously, changes when you run barefoot. It becomes shorter, choppier and lighter: something Pain preaches because it cuts the stress on your feet.

In shoes, you almost always land on your heel, where the manufacturers place the most padding. Barefoot, you land on the natural cushion of your mid-foot. It’s not painful, but you do feel every footfall, and not every surface is created equal: I found the dark asphalt of the road itself the best. In the interests of science, we burst across a muddy park. It’s very tactile: like squeezing jelly between your fingers. I like it. So does Greg.

On the phone from the US, MacDougall explains. “The foot is the greatest disciplinarian. You can’t over-pronate, can’t over-train, can’t over-stride… if you do anything wrong, the foot will tell you `uh uh, don’t do that’. Shoes are like morphine: a sedative that deadens the pain.”

Because the foot tells you how to run, MacDougall says anyone can make the transition within three weeks. He offers a few tips, then adds: “I still feel definitely the student here, not the master; very grudgingly I will give people a couple of pointers. I didn’t feel qualified to at first, but I found it is so easy, there is little to teach.”

The science behind MacDougall’s claims is impressive, led by a Newcastle University (Australia) study which found no evidence-based research to show high-tech running shoes are in any way beneficial.

MacDougall’s thesis boils down to this: the best shoes are the worst (one report suggested you are 123% more likely to sustain injury in more expensive shoes, because they offer too much support); feet like impact (and “it’s preposterous to think that half an inch of rubber is going to make a difference” when 12 times your bodyweight pounds through them); and finally, that humans are designed to run shoeless, and shoes weaken you. He cites one doctor who describes them having the same wasting effect as plaster casts.

Pain says the common ankle, back and knee problems his clients arrive with support these theories and says the shoeless science makes “perfect sense”, although he’d only use barefoot running as a measured part of training.

Born to Run isn’t just an anti-Nike manifesto. It’s also a fantastic tale of a reclusive tribe of Mexican Indians, the Tarahumara, who embark on two-day trail-race adventures wearing home-made leather sandals. It’s the story of how MacDougall and a group of crack ultra-runners tracked them down to engage in an epic desert ultra-race. It’s how the experience changed them all, and how MacDougall learned from them exactly how to run. The Tarahumura, incidentally, are aware of their subsequent impact on the running community, but, says MacDougall, don’t care. “It’s irrelevant to them; like talking about Hollywood to the Amish.”

The most extreme of the book’s ultra-runners is ‘Barefoot’ Ted MacDonald. By email, he says he doesn’t think the movement will threaten the shoe giants. “Threaten, no. Allow 1000 blossoms to bloom, yes. I am not dogmatically barefoot, even though I think it is the best. I have no problem endorsing companies making minimal shoes and not telling me I’m broken by design.”

MacDougall, meanwhile, who ironically only began barefooting after the epic race (pushed into it by a broken toe) is now a devotee. Has it made him a better runner?

“I see it differently than I would’ve a few years ago. If I could do a 3:59:59, instead of a four-hour, marathon, that was better. Now I couldn’t give a shit about that 1 sec. Better to me means I don’t ever get hurt, I enjoy it, and I never dread it.”

I couldn’t resist to expose these ‘Pogo-stick meets high-heel’ shoes. Z-Coil states that their shoes incorporate “patented, shock-absorbing design greatly reduces impact to the body and distributes pressure more evenly across the foot than conventional shoes do. And less impact means less pain.” These things are totally ridiculous and dangerous… 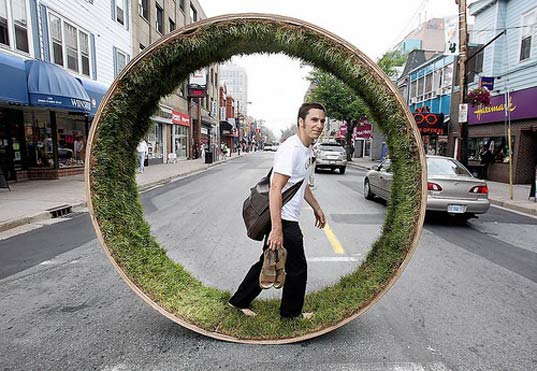 Photo Courtesy bamakve When you think of someone running barefoot, you might think “I could never do that, my feet are too _____”. (fill in your reason here) The fact of the matter is YOU too can run, hike, dance, walk (even mosey if the mood were to strike) barefoot!…

Running really is a mental game, but it’s also just…a head game. Ever thought about how your head stabilizes itself when you run? Or how this particular piece of anatomy has evolved to work in tandem with the rest of your body when it runs? Meet Daniel Leiberman, Harvard evolutionary biology professor,…