Should You Toss Your Running Shoes and Go Barefoot? 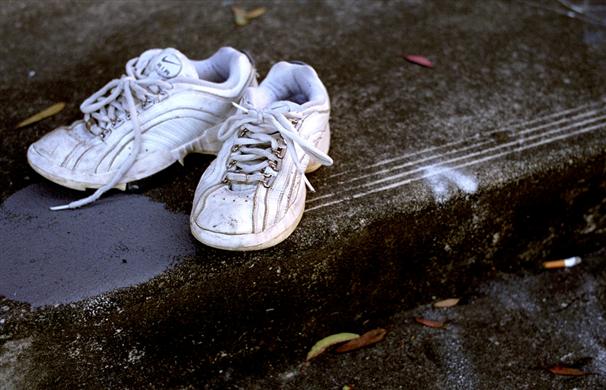 Remember when you were a kid? You raced around the playground or the yard for hours at a time, somehow managing not to hurt yourself despite your lack of $150 running shoes and custom-made $400 orthotic inserts. There’s a growing sense in many quarters that your childhood impulse may have been the correct one and that the very shoes we think are protecting us from harm may be causing it.

For decades, there’s been a grass-roots movement for extremely minimalist, i.e., barefoot running. (See barefootrunning.org for stories from this crew.) But only in the past few years have companies begun to get in on the act, too. They now offer stripped-down models that don’t have the padding and structural elements that characterize conventional running shoes. There’s no little irony in Nike’s instructions to begin “barefoot-like” running with one $90-plus model of its Free lineup, then phase down through two more models before you’re running with a “nearly naked feeling.” (Presumably, they don’t want you to take the next step and swap Nikes for the actual naked feeling, though.) Other companies, including New Balance, Newton, Ecco, and Terra Plana, also have minimalist footwear for running and walking.

In his recent book, Born to Run: A Hidden Tribe, Superathletes, and the Greatest Race the World Has Never Seen, author Christopher McDougall explores the broader notion of what “natural” running would entail. Taking aim at shoe companies, he argues that modern running shoes promote a heel-first stride that makes us more vulnerable to injuries. (He’s a convert; since running in Vibram FiveFingers, a neoprene socklike foot covering, and changing his stride, he’s seen his problems disappear.) McDougall cites studies showing that more expensive running shoes don’t necessarily lead to fewer injuries. Other research suggests that heavily cushioned shoes actually prevent your foot from sensing the ground and can make you stomp down harder than if you didn’t have all that padding.

“They don’t let the foot, and ultimately the body, work like it’s supposed to,” says Galahad Clark, owner of Terra Plana, which produces a shoe technology — Vivo Barefoot — that puts just a 3-millimeter, flexible (but puncture-resistant) sole between your foot and the ground. “Expensive running shoes let you run in a way and arguably for distances that you normally wouldn’t have been able to do,” he says. Walking and running barefoot, or close to it, allows what Clark calls your “amazing” foot to adjust to whatever surfaces—even modern, hard ones—and circumstances it experiences.

So what’s the evidence behind this notion? And should you try it? There isn’t strong evidence that barefoot running is any better or worse than running with more structured shoes, says Veni Kong, a kinesiologist at the University of Texas-El Paso, in part because there aren’t enough regular barefoot runners with whom to compare users of running shoes. But there’s a lack of a solid evidence base for running footwear in general, she notes. People are often prescribed shoes with elevated, padded heels that are designed to control pronation, but a March review in the British Journal of Sports Medicine found no evidence behind the idea that this will prevent injury or improve performance.

Keith Williams, an exercise biologist at the University of California-Davis, says humans are both incredibly varied and incredibly adaptable. The former means some of us pronate our feet as few as 2 degrees, and others as much as 25 degrees. Our bones articulate differently, our ligaments are structured differently. Some of us are heavy, some aren’t. And some people, he says, have truly been helped by modern shoes, inserts, and orthotics. Others probably don’t need the bells and whistles. So to prescribe one kind of shoe (or lack thereof) or running technique for everyone is not a good idea. “I’m against the one-size-fits-all approach for anything,” he says.

On the other hand, Williams says, our adaptability means that a lot of us could probably adjust over time to running with minimal or no cushioning, and for some, it might bring benefits. Just by wearing lighter footwear, you reduce the amount of energy involved in running. That kind of change, or varying the stresses on the lower legs, could theoretically reduce injury or improve performance for some people.

If you’d like to give it a whirl, don’t jump into it whole hog. Start off slowly, advises Kong, and stop if it doesn’t feel right, since you’re probably used to wearing regular shoes and need to adjust. “If we said to everyone in the world, just kick off your shoes and go running, a lot of people would hurt themselves,” says Clark. Obviously, be aware of the surface you’re running on; simply to protect against cuts and scrapes, going totally barefoot down the sidewalks of New York is probably not a great idea. If you’re using minimalist shoes, try to avoid landing on your heel, which you may be used to doing in padded shoes, and perhaps start out by running on grass, Clark says. In the end, he says, the ultimate experts on footwear are you and your body.

Support BarefootRunner.com by purchasing Born to Run: A Hidden Tribe, Superathletes, and the Greatest Race the World Has Never Seen through this link.

5 Things to Look for in Shoes

Photo Credit: eugenemartin Are you considering buying a pair of running shoes? You probably already know that barefoot is best. Perhaps you simply need a pair for those times that barefoot isn’t the best choice — work, the gym, a first date, you get the picture. So, you head out…