The slurping of ramen in Tampopo makes me want to run out to the noodle bar. Mario’s Italian food in Mostly Martha turns even humble, dried pasta into something sensuous and ripe with meaning. From Pulp Fiction’s “Royale with Cheese” dialogue to the butter scene in Last Tango in Paris, food has often played a supporting role in movies. Just think about the Reese’s Pieces in E.T., the pie-eating contest in Stand By Me, Lelaina’s snack food subsistence in Reality Bites, or the opening fish preparation scene in Eat Drink Man Woman

This summer, however, food is taking the lead in a cornucopia of documentaries hitting the big screen, the festival circuit, and the DVD aisle. They tend to offer something considerably less sweet than the familiar food-infused cinematic concoctions. The filmmakers show us again and again just how disgusting eating has become. This crop seems to follow the tradition of narrative exposÃ©s like Fast Food Nation and Humane Society’s downer cow video. Here’s a look at what’s coming up.

Director Robert Kenner manages to depict what’s wrong with the food system in 93 minutes with the help of authors Michael Pollan and Eric Schlosser. Kenner explores the consequences of the industrial food system with infographics and devastating personal stories, including those of a mother who lost her 2-year-old son because of an E. coli-contaminated hamburger and a Mexican-American family that opts for fast food because it seems cheaper than fresh vegetables.

The film also hints at the brighter side of the food system, from organic yogurt pioneer Gary Hirshberg’s attempts to go big by getting his products into Wal-Mart to proclamations about good food from Joel Salatin, the celebrated farmer from Polyface Farm in Virginia. The scenes from Salatin’s chicken slaughtering yard, an investigation into workers’ rights, and a companion book gives this film something for everyone—from neophytes to food policy wonks.

Severine von Tscharner Fleming’s upcoming documentary focuses on farmers under 40. While that might not sound like a big deal, considering that the average age of farmers in the United States is 57, her twenty- and thirty-something farmers represent a new face of farming that is both whimsical and sensible. She’s also launched a blog, a magic goat emblem (!), and a guide for beginning farmers—all hoping to inspire a new crop of youthful agrarians. With so many food documentaries focused on gurus like Pollan and company, expect this film to examine the demographic who will actually cultivate farming’s future.

Ana Sofia Joanes’s documentary also features sustainable food gurus Joel Salatin and Micheal Pollan, but tries to put a more positive spin on the reforms the food system needs. Based on a Salatin clip (in which he compares chemical agriculture to a drug trip) alone, the film may prove to be funnier and less heavy-handed than the others. Also expect appearances from Will Allen, the founder of the urban agriculture organization Growing Power, and other sustainable agriculture heavyweights talking about those baby steps we can take towards greener pastures. Think less scaremongering and more idealism.

Watch the trailer (On the film festival circuit.)

Film producer Bryan Young, who lost 40 pounds making the documentary, reframes obesity as a societal problem exacerbated by poorly managed food policy. The film depicts a 12-year old girl getting a liposuction and attempts to explain the hardwiring that compels humans to seek out fatty, high-energy foods. The film includes interviews with the consumer advocate Ralph Nader and the food psychology expert Brian Wansink. Expect a narrow and deep look at the psychological and evolutionary side of America’s epidemic of expanding gutlines.

Chris Taylor’s film frames problems with agribusiness as a way to introduce the many heroes of California “counter-cuisine” such as chefs Alice Waters and Suzanne Goin and writers Michael Pollan and Russ Parsons. While its glorification of the movement might feel like hagiography to some, Grist’s Tom Philpott offers some incisive commentary in what could be a companion for Julie Guthman’s academic, but comprehensive, Agrarian Dreams

Watch the trailer (On the festival circuit.)

The End of the Line

Billed as the first major documentary about overfishing, reporter Charles Clover, author of a book of the same name that’s been called the “maritime equivalent of Silent Spring,” follows politicians, a tuna farmer-turned-whistleblower, and restaurateurs. Expect a British reporter aggressively exploring the darker side of seafood.

Watch the trailer (Opening in limited venues on June 19).

These documentaries are part of a growing awareness about food—and watching them might just inspire a home-cooked meal, a community garden, or a call to Congress. Still, food cinema that celebrating the act of eating tends to show up more often in foreign titles. In Gastronomica’s long list of food films, even the movies made in Hollywood have a tendency to focus on ethnic foods: the Italian food in Big Night, for example. Maybe this is the collective point these documentaries make: In America, we’ve got some work to do before we can celebrate the sensuous, regionally distinctive side of our nation’s cuisine on the big screen.

5 Things to Look for in Shoes

Photo Credit: eugenemartin Are you considering buying a pair of running shoes? You probably already know that barefoot is best. Perhaps you simply need a pair for those times that barefoot isn’t the best choice — work, the gym, a first date, you get the picture. So, you head out…

Photo Courtesy: With all the barefoot running buzz it seems little spotlight is put on the simple pleasure and benefit of barefoot walking When a person wears shoes all the time, their feet (soles) become soft and tender. So by barefoot walking outdoors at least several times a week your… 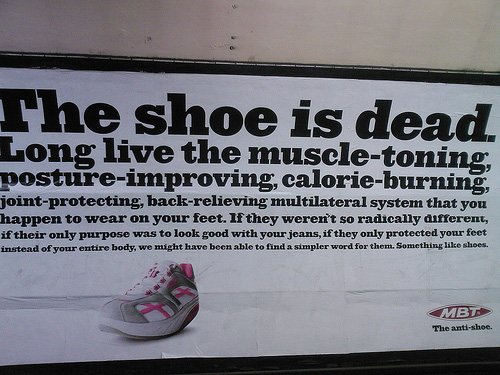 say what you mean

Many of you might have seen the MBT shoes. If you’ve taken a flight in the past 2 years or so and flipped through those entertaining in-flight shopping mags, then you’ve seen these silly shoes. Recently, the marketing company behind this brand of shoes launched their “anti-shoe” campaign. This ad…