I Stare at Runners, I Admit It.

I’ve been staring and studying runner’s strides more and more often. I’ve covered this in a previous post however I must admit that my concern for my fellow runner’s health is concerning me more than ever. SportsOneSource reported a few months ago that running is increasing in interest in 2009. No surprise here. An inexpensive and natural way to stay healthy and fit – running is natural.

Just today while walking Lucy, the family black Lab, a runner caught my eye. The guy was fast. Faster than me. He was wearing shoes. He was heel striking. I was concerned that his form (no thanks to highly cushioned shoes) was going to cause him injury sooner or later.

I was about to call out. I wanted to stop him. I didn’t. Meanwhile my wife is hushing me to keep quiet in order to not embarrass her on yet another evening stroll. This happens nearly every day.

From time to time I’ll notice shod runners actually are midfoot/forefoot landers. This isn’t a common occurrence mind you. It’s moments like that that I can’t help but think that even a non-barefoot runner (or observer) would question the purpose of cushioned heel wedges. Want to know the truth? There is no purpose. It serves as a ‘filler’ of air between the heel and the surface. A critically dangerous design that causes your body to ‘strike’ harder than nature intended. Why? Because your feet and body want to feel the surface you’re running on and naturally adjust your stride, your stance and your performance. If you want to run in shoes, a minimal midsole (at best) is all that is needed. No more than an 0.33″ in my opinion, even that is excessive. That being said, it’s better than the standard 0.86″to 0.91″ that major athletic shoes design into their heels (not counting the insole).

Just looking and staring out for your health my friends, just staring out.

Rediscovery of Feet and Soul

Image credit: Paul Allen This is the story of how taking off my shoes changed my life for the better. In a way, it is the story of my life, so it is a bit long, but I hope your readers will identify with bits or pieces of it. I… 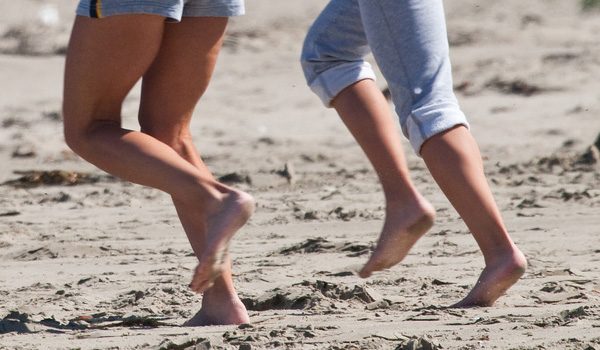 Image courtesy mikebaird Original post by STEVE KILGALLON – Sunday Star Times Thirty years ago, the modern running shoe was invented. Since then, running-related injuries have risen. And so a growing movement of runners are taking to the streets barefoot. Perhaps no man has had more positive influence upon running than…