*Weight and thickness are always measured without insole when possible (since I usually recommend losing the insole, thus making the shoe more minimal). The weight is found using electronic scales from OBH that weigh down to 1 gram. The thickness is measured with a one-handed bar clamp. Thickness and especially weight are of course dependent on shoe size (See above).

Feelmax is the Finnish company that brought us the Feelmax toe socks. I have had very good experiences with these socks because of the fact that they keep your toes apart and thus prevent friction and moist from ruining the skin between the toes. They definitely are a “barefoot runner’s” choice (there are other brands out there, such as Injinji, but they are extremely difficult to acquire in Europe).

But Feelmax has from 2007 entered the shoe market as well and the philosophy is… Yes, you guessed it: “Go barefoot,” as the pamphlet says – but they mean barefoot with shoes on. It’s the same impossible offer made by Vibram. I mean… you can’t be barefoot and have a shoe on. Hello! The offer is off course an advertising trick hinting that this particular product offers the best from two favorable, amazing and worthy worlds.

Ok, enough about advertising. The purpose of this brief comment is of course to underline that here we have yet another product with a lot of barefoot philosophy surrounding it. And that’s cool, because this is precisely what I wanted after reviewing the FiveFingers Classic.

And the Feelmax minimal shoe is indeed innovating in a lot of ways. For one thing it uses a Schoeller-Keprotec sole, which has Kevlar in it. It is an interesting choice for a sole, because it reminds you more of a piece of fabric for the upper part of a shoe (it is used in the lower part of the upper shoe as well). It looks nothing like a sole and it doesn’t feel like a sole either. What it reminds you of I will save for the next section of the review (Use), but let’s instead note that the benefits of this approach are flexibility, low weight and thinness (Sole = 1 mm. (0.03937 in.) – Try beating that!). The other way around you wonder how long the soles will last, even though the Swiss manufacturer of the fabric, Schoeller, promises “extreme tear resistance”, “durability” and “maximum protection”. 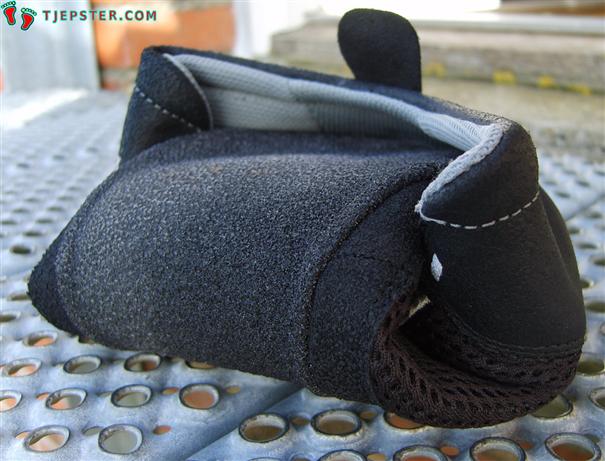 The upper part of the shoe is leather and breathable neoprene and it feels soft and comfortable. The Phylon insole is glued on, but only in the front, so you can throw it away if you want to be even closer to the ground. The shoe is secured to the foot with laces.

Besides the sole, the innovating part of the Feelmax shoe is its weight (probably the lightest shoe I have ever seen or felt – 120 gr. (4.23 oz.) per shoe, insole not included – the lightest minimal shoe reviewed so far). That’s really all there is to it. A very different sole and low weight. Perhaps it doesn’t seem like much, but in fact it is. The fact that the sole merges so naturally with the upper part (the shoe looks and feels like it is made out of one single piece of fabric) is what makes it so special. It is an old formula that gives the shoe a completely unique feeling (“Which old formula?” you ask. Well, we shall see in a moment). 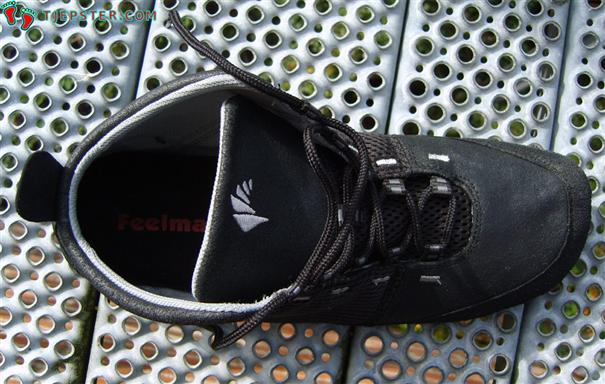 Finally, let’s consider the packing of the product: it comes in a nice black container (with an image of bare feet on it, of course). Inside it is a green cardboard box, which contains a pair of shoes and a little pamphlet with instructions and philosophy. It’s quite inviting wrapping. Then you reach for the shoes… 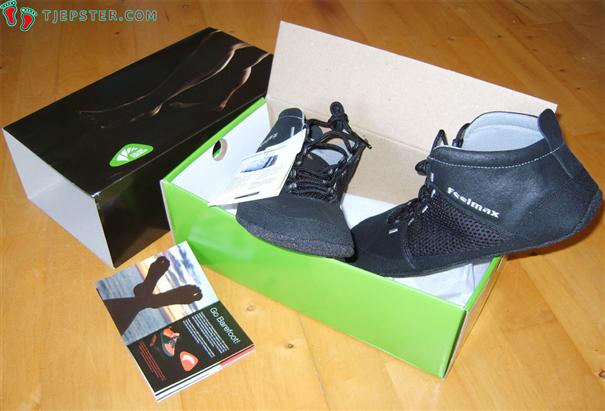 Your most immediate outburst when taking the shoes out of the box is: “Oh, my God! I just spend €79 on a pair of slippers!” You eye the carpet-looking Keprotec sole and wonder: “Is this supposed to be used outside of my home? Finally, you notice that the shoes bear a strong resemblance to the ancient moccasin. You put them on and… yes, history flows through your mind. You become the happy shepherd from the Iron Age with his happy leather moccasins that you saw replicas of in the museum as a child. Or the Native American with his bow and axe… and leather moccasins.

Ok, I remember being told by the dear museum keeper that moccasins – usually being made out of a single piece of leather (both upper part and sole) – didn’t last that long, and they would definitely wear out quickly on modern roads and pavements. Doesn’t sound good so far.

The next thing you notice very abruptly is how insanely lightweight they are. “OK,” you think. “How durable can these ultra light, slipper-looking, moccasin wannabes in fact be?” It even says in the pamphlet that they wear out quicker on asphalt (“Asphalt and other hard surfaces cause faster wear of the soles”). Not the best marketing trick in the world.

So the immediate encounter is one of surprise and a little horror. To hold a pair of minimal shoes that do not weigh much more than your socks is weird. And the outsole, which is very similar to normal felt, really makes you frown. Where the FiveFingers made you skeptical regarding the looks of the shoes, Feelmax shoes make you skeptical because of the feeling (whereas the looks are very attractive). 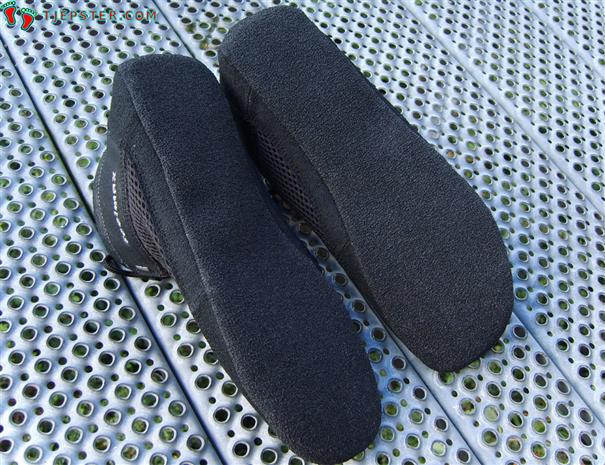 But the real astonishment comes when you start using the shoes. After a week my terror had changed to affection. The lightness was immensely enjoyable, and the moccasin-feeling was a whole new and pleasant experience.

You are never in doubt that these minimal shoes don’t have a “sole”. They are like one piece of fabric that you wrap around your feet. In a way Feelmax has re-invented the moccasin using new materials, and it is a brilliant idea with both advantages and disadvantages. Among the advantages is the nice surface contact – you clearly feel the ground you walk on. Another thing is the fact that they don’t feel like shoes. They are more like socks and that really sets your feet free. This is achieved by thinking the shoe as one whole unit – not composed of a soft upper material and a hard sole – but composed of equivalent materials. That is definitely an interesting idea and it certainly makes you want to try a pair of old-fashioned moccasins as well.

There are disadvantages, though. One is mediocre skid resistance. On asphalt and flagstones they prevail, but on grass or wet surfaces they make you nervous. Another clear disadvantage is the lack of water resistance, and I really mean “the complete lack of”. It quickly becomes apparent that the Keprotec sole allows water to pass right through it. This means that you can’t even walk on moist surfaces without getting wet feet. It is almost like the sole sucks water into the shoes like a sponge.

Overall we could say that regarding both advantages and disadvantages the shoes offer new and quite interesting experiences. As a whole the Keprotec sole does have some nice abilities, though, and it protects you well from both sharp stones, pointy sticks and glass etc. The biggest problem is that it wears out quickly.

Another design aspect to consider is the fact that the Keprotec material is used on the lower part of the upper shoe as well. This is clever, when you think of the low profile of the shoes, and it has saved me from scratching the shoes’ upper part many times.

Yet another aspect is of course the looks. The shoes really look like “regular shoes” – in fact they look pretty cool, I think. They should have been wider in the front, though. It’s not that they are particularly pointy, but still, most feet aren’t that rectangular. Interestingly enough, the Keprotec material seems to adapt a little to the shape of your feet, but don’t expect too much.

If we consider running in the shoes, they absolutely work. The rear part is low enough to allow your Achilles Tendon to function properly and the weight is of course a huge advantage. And they are very, very comfortable, with no parts annoying your feet. And the laces work well – allowing you to fasten the shoes right – even though you at times think they are slipping off your feet. In fact they aren’t, but the slanting back part feels a bit unsteady once in a while.

The Feelmax shoes offer better breathability than most shoes, but don’t expect them to perform like sandals. They are able to keep your feet warm during the colder periods of the year (right now the lowest temperature outside in Denmark (during the day) is getting near 12 degrees Celsius (54 degrees Fahrenheit), but I think they will work in much lower temperatures. Unless it snows or rains, because Feelmax shoes hate moist, as mentioned earlier, which really is a shame (they have so cleverly made the Keprotec material extend a couple of centimetres up around the foot. Imagine if the material was waterproof. You would have been able to walk through small puddles. As it is now the upper shoe is even more water resistant than the sole. A strange experience).

If the shoes become too dirty or smelly, they can be machine-washed, but I don’t think that they would enjoy too much of this kind of treatment.

I would have liked to ask the Swiss manufacturer of the Keprotec some questions about the material, but unfortunately they are a bit difficult to get answers from. But they did say that the Keprotec used in the Feelmax soles was made especially for Feelmax. How they came up with the idea, and how they worked together with Feelmax and which things they considered important will remain a secret for now. The water resistance aspect would have been a nice issue to discuss. 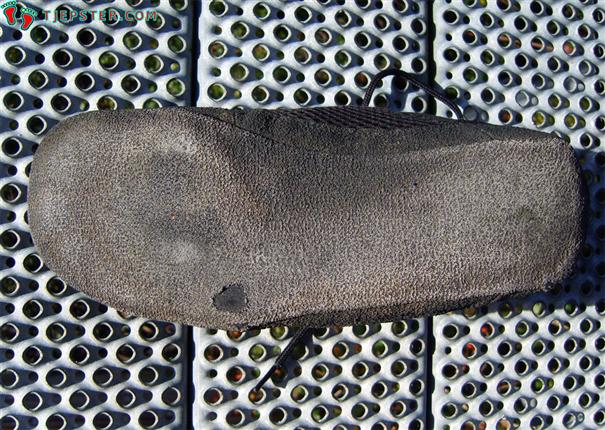 The Feelmax shoes are indeed a favorable experience. They are comfortable and perfect for both running and walking. Their best aspects are the weight (top grade!), the looks and the moccasin-feeling. Bad points are horrible water resistance, somewhat poor skid resistance and the price.

Comments about durability can be divided between the upper and lower part. After three weeks of intensive use in very different conditions the upper part looks completely new. When they get dirty, the soil actually disappears quickly all by itself (I know, it’s amazing). The sole will not remain black for many minutes though, and the Keprotec fairly quickly deteriorates (small pieces fall off once in a while).

In my opinion Feelmax has done a very great job, and the Finnish company deserves a lot of credit for thinking out of the box. My biggest expectations for the future would be 1) a lower price (their mediocre durability considered) and 2) a water-repellent (and longer lasting) Keprotec sole. There are some cheaper examples of Feelmax shoes, but they use a zip instead of laces, and I don’t think I trust a zip as a securing device in shoes. There is also a cheaper grey model with laces. All in all, the price isn’t insane – compared to regular running shoes that here in Denmark often cost €140 – €160. They last twice as long, though. (Vibram FiveFingers will also last a lot longer).

These things said, Feelmax minimal shoes definitely have a future.

Support BarefootRunner.com and purchase your Feelmax Panka shoes using our link to Amazon.com. 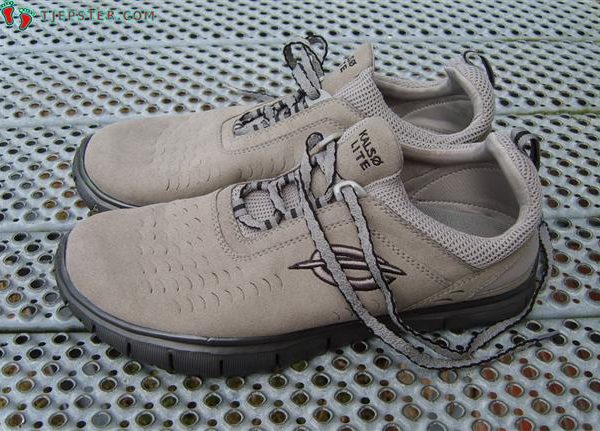 We’re very excited that the long-anticipated SKORA Running shoes are finally coming to fruition. You can pre-order your very own pair of BASE or FORM shoes. Visit SKORARunning.com to get the full story behind these fantastic minimalist shoes. We here at BarefootRunner.com have been lucky enough to test a few…